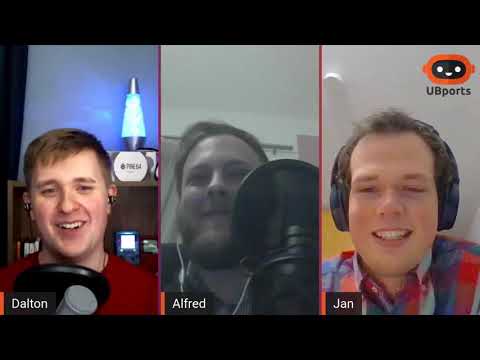 This time the presenters were Dalton, Jan and Alfred

Of course OTA-13 is finally out. Stable is now available for Xperia X , X Compact,  X Performance, OnePlus3 and OnePlus3T. The new version of qtwebengine brings numerous improvements, including grab handle text selection. Integrating newer versions of Qt brings all access to all the advances made in their updates. We now have icon based settings pages, which many people prefer. Contacts, dialer and messaging apps are greatly improved. Imports to address book are now more intuitive and you can add birthday reminders.

Every app is launching around half a second faster, which is actually a very big difference. Magnetic sleeve, wake and sleep now works on Xperia phones.

Jan has been working on the installer and has responded to and updated 200 issues. Changes in UBports installer 4.20 include improved handling of OEM unlocking, device recognition and error handling. Encrypted partitions issues will now be identified. In addition, some more device specific issues have been addressed. There are also some bug fixes and background libraries have been updated. Quite soon there will be more improvements. The intention is that some packages will download and unpack on the systems. This should also include the download of packages from external sources, not maintained by us. We will also introduce ADB side load.
In a collaborative project with Volla, we will arrange that all of the OS options available for Volla phones – Sailfish, Ut and Volla OS itself – will be available through the installer. Heimdal will be added, to give the installer support for ported Samsung devices. Hopefully much of this will happen in the next two weeks.

Immense thanks go to Darkeye from the community, for the amazing work he has done as maintainer of the Clock and Camera core apps. The time has come for him to pull out of the maintainer responsibility but we would like to celebrate what he has achieved. Major work had to be done to Clock to improve timezone handling. That was a very challenging project.
He implemented being able to switch between light and dark themes without closing the app. It was the first app to be able to do that. He made the Clock app themeable and added timer functions. The Camera grid view improvements are down to Darkeye. You can zoom in and out and highlight the image data from a single image. The settings dialog now follows the system style. Maybe you didn’t know but he extended the basic date stamp option so that you are now able to make any custom stamp you like.
Importantly, he has also produced a huge amount of documentation to guide those who follow. New maintainers for those apps would be great but you don’t have to commit at that level to get involved and any assistance with those apps will be most welcome.

Alfred has been working on NFC implementation. Currently that work is directed towards Halium 9 but Xperia X will soon follow. He issued an invitation to porters to incorporate the work in their own port if they wish. There is a guide in the forum post about how to do that. Also being investigated is the possible integration of NFC into app development. Maybe we could use Qt NFC for that – though sadly that has been dropped from Qt 6.0. We will have to see what we can do about that. Tasker applications would be interesting, such as running changes to audio profiles, adjusting lighting and other aspects of home automation.That would be really cool.

Gizmochicken asked about how and when UT will work with snap packages? There are other priorities of course but is it a goal? Yes it is, although not the highest. It is a change we would make, not to solve any problem but to expand our horizons. One obvious complication is that snapd needs systemd . Using upstart would really be very difficult. That means that it would be hard for older devices to keep up. A central part of our aim would be to have our own apps packaged as snaps. It would not be about replacing those with desktop options. Our needs are quite specific to our platform. As with Libertine, straight desktop apps will not usually be very practical for our form factor.

If we can proceed, could we start maybe with the PinePhone because that could foster the development of cross platform apps? Well it is true that we are already diverging quite a lot in Edge and elsewhere but with a small developer team it is very much the case that the more divergence there is, the greater the problems we will create.

When will the next UT branded PinePhone be released? We have no idea about that but remember that the PinePhone is still available with the logo of other communities. You can buy theirs and run UT on it if you wish. As we have said before, those other OS  groups work closely with us on shared problems. They are not competitors and deserve the $10 funding portion.

Alan asked what is being done to recover features in mirclient which have been lost in the move to Wayland? In particular, trusted prompts are missing. Trusted sessions for example allow the Camera app to use the camera hardware. It is a similar situation with online accounts. XDG4 protocol allows an app to draw over another app. We wouldn’t like apps to have their own specific trust arrangements. The mechanism in xdg-desktop-portal looks a better way of doing this. It already exists in Gnome and is a feature of the shell. Somehow the shell knows to provide the overlay over the app. Dalton has no idea about how it achieves this. Someone needs to have a lot of time to dig into this whole issue and come up with some ideas about how we should approach it. If anyone out there know more, please get in touch.

Fla asked what work is needed on Halium 7.1

Actually it has progressed very well and is effectively now ‘done’. The issues remaining are likely to be device specific. On Xperia X for example there are Bluetooth problems. We suggest you try it out with a Fairphone 2 and send in some test reports. Rachanan has a pretty good overview on it.

Have any OpenStore apps been ported to Manjaro/Lomiri?  They need package builds for Arch. We have talked about future plans, for example snap or maybe flatpak. Click will not go into other distros because it was narrowly designed to serve our specific needs. It is all still very open and nothing is imminent.

Keneda asked whether it would be possible to allow users to update core apps in between OS updates, so that we don’t have to wait so long. Unfortunately, apps like Messaging and Browser are tightly integrated into the system and provide services to other parts of the OS. They cannot be easily disentangled and if updated independently would cause a lot of things to break.

Farkasdvd has a PinePhone convergence package, which is not working. The problem there is the status of USBC controller. Plug in display detects but the kernel version doesn’t know what to do. It needs a kernel version update and some tweaks to kernel management.

Constantin asked about how resources are divided up between the Android based and PinePhone wings of the project? It is an interesting challenge and ultimately the community must decide the balance. Volla also comes into this. With PinePhone we are not working on our own. We have just merged the fix to make the screenshot button work but others did the work for that. There are lots of similar ‘external’ solutions which we incorporate, especially when it comes to kernel fixes. For OTA-13 it was mainly Volla and Halium 9 though.

Big thanks to Rodney for the testing work he is doing, hopefully for the OTA-15 release.

AAAf666 asked whether disk encryption for non Halium (i.e. PinePhone) is on the UT roadmap? Well we have a separate data partition. How to encrypt and decrypt it? One way would need a huge initramfs . Or we could go the Android and iOS route and get a long way into startup before getting to that point. If they chose that approach, the chances are that we will find it the most practical option too.

If the root file system you are running from hasn’t been encrypted, how do you know if it has been modified? Google use a method called Very which uses the kernel. Something like that could maybe be implemented on the PinePhone.