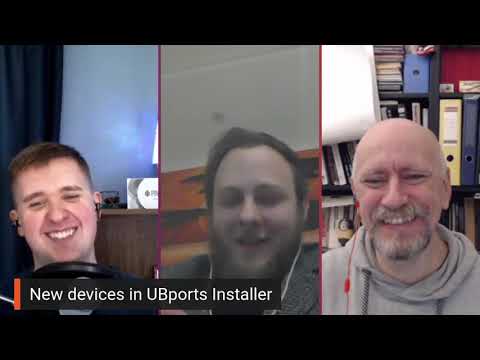 The original plan with OTA-15 was to advance mostly with Qt 5.12 but we have switched the emphasis towards Volla support as that device is now arriving in users’ hands. The Qt update is pretty complicated anyway and this will give us more time for a smooth transition. Click review needs some work, so that OpenStore distinguishes between apps written for the older Qt and the new one, ensuring that the right resources are in place.

The dialler crash has been mostly fixed. A fix for audio in Volla calls will also fix a similar problem with Xperia X. The change addresses a playback caching issue which caused stuttering. Bluetooth problems when using redial from a headset should also  be solved soon. There are 122 open Prs of which 24 relate to Morph browser.

Android 9 devices have been supported by the OTA scheme since OTA-14 but the reality is that they are still using slightly different images and we don’t yet have complete uniformity.

Alfred announced that Pixel 3a (sargo) is now in the installer. In the USA it has some issues with calls and SMS messages and those are being worked on. OnePlus 2 by Vince is now in installer. Give feedback please if you have that device. All new ports benefit from the experience of real world use but we rely on you to provide your comments.

Installer updates are arriving twice a week at the moment. There are both bug fixes and new features. Devices are now correctly detected in fast-boot and OEM unlocking is done automatically in many cases, if you forgot. The installer now reconnects if you get the ‘authorization is required’ screen. USB debugging is sorted out live. It now acts as an Android and Lineage OS installer, so you can now easily go back if you were just curious to try UT.

Finally, it displays the real device name. Previously it was showing the chipset name for some devices and unfortunately most chipsets are used across a range of very different devices, many of which are not even supported...

McMarius asked whether any new features are coming to Morph browser? Quite a few are on the away. Browser development is very active. One feature that Alfred is excited about is being able to close browser tabs by swiping them sideways. That will come soonish. You can help us test the raft of new features if you are running on devel channel. There are lots of other PRs on the way. UBports QA group on telegram is a good place to head if you want to be an app tester.

Povoq asked if OpenStore could host different frameworks, to support different channels, in order to make beta testing easier. There is a long standing feature request for that. Something along those lines was put in place for the Xenial transition, so there is some groundwork. A lot more would have to be done in order to allow what is suggested. It is handled in java-script so if that is your specialty, we would welcome your support to build those structures.

What is happening with PinePhone? Is nothing happening? Actually a lot of things are happening but a lot still needs to be done to get it working satisfactorily. Kernel 5.9 modem power modifications need to be made for example. Telephony needs work. DTB at boot time needs to be detected for and then selected for the exact PinePhone in your hand. Hardware variation is minor but there are now quite a lot of different variants and the boot process needs to be smart. One of the overarching problems is that a lot of things need to be done in a particular order, not randomly or in parallel. Logistically, that presents a major challenge. There are very few core developers and they are weighted down by Volla work, the Qt upgrade, OTA-15 etc etc. There are lots of consumers, but few developers. It was hoped that the launch of the PinePhone would be the spark that would expand the pool of core developers. To be honest, that has not happened as yet. That doesn’t mean it won’t. If you have contacts who might be interested, why not give them a nudge?

How easy is it to borrow features and bug fixes from other OS platforms that work on the PinePhone? To be honest, not that easy, as they are all really quite different and the problems they fall into often reflect specific characteristics of their OS. We work together where we can but the overlaps are not that many. Whether it is Bluetooth on the Tab or Sailfish rotation issues, there is not much we can share. For camera support there is the Megapixels app but that is only for the Pinehpone and not something we can carry over to Android devices. Other camera fixes for UT in general are in the works but they are written for Qt 5.12 and those upgrades will be put in a queue until that switch happens. There will be a leap in the capabilities of gstreamer though.

Will Manjaro lead to more cross fertilization soon? This question came up last time and was covered in great length, so no point in repeating it here. Go back to Q&A 88 and check it out.

Florian chatted with Sailfish recently. They are quite stalled on Qt 5.9. It is a challenging upgrade for us but we have a much clearer path. Hardware access, security etc. is all involved and it is very difficult. Although we are building in a  very different way, we do stay in touch and share where we can. We will catch up with Qt 5.12 soon but KDE have since moved on ahead so by the time we get there, we will have lost the chance for much compatibility.

Rick asked about Anbox and if there is any update? We are on-boarding a dedicated developer. At this stage we are mutually deciding whether there is a realistic way forward and the right skills match. Neither side can commit fully until we are clear about what needs doing, how it will be done and whether the developer will be able to deliver. We will give an update on progress when there is something to report. As for up-streaming any work we do, that is quite unlikely. Everything we do will be for mobile and given our resources it will probably be a but hackish. Canonical are doing some work but it bears little relation to our needs and we are not likely to benefit much, if at all. Writing middle-ware will be a huge and daunting task. Alternatives to Anbox are maybe possible and we have been giving thought to that. All are highly speculative though and have not gone beyond a bit of creative thinking. As we have said before, Anbox is a very specialized and interesting development area. Involvement would be very niche thing but potentially a great opportunity for the right person.

HSCE asked about apps not getting GPS access when in the background. At the moment, only a terminal hack is possible. It is a feature of our OS that apps go to sleep in background. That much is intentional for security reasons but the inability to choose to wake them up is a problem and can be called a bug. Another thing that we need to work on.