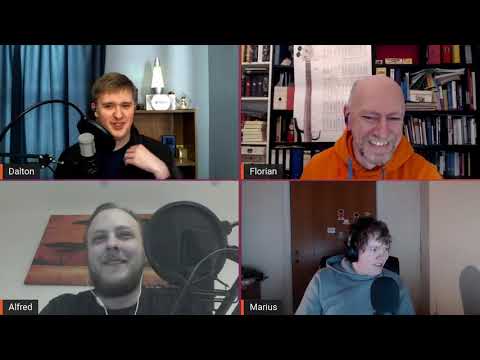 Presenting this time were Marius, Alfred, Dalton and Florian.

Go to devices.ubuntu-touch.io for info about whether your device is supported.
Questions were taken first this time round.

Gizmochicken asked about progress with systemd. Marius said it is progressing well. Does that mean we may see a shift away from upstart, even while we are on 16.04? It would probably be possible to do that but the likelihood is that it would generate unnecessary work. Implementing to a limited extent would have advantages purely as a cross check, to discover whether any issues are system related or inherent to systemd. The Manjaro project is a pretty good test bed already though.

JanEscape asked why the PinePhone doesn’t utilise kernel 5.10-rc6 in Stable channel? In Q&A 90 Dalton spoke a lot about this and explained how time-consuming kernel patching is. Some help in doing it would be great but it is very specialised work.

Is anyone working on porting Lomiri to Debian and if so, what is current progress? We are indeed trying to do that as we transition to 20.04. UT elements are being exported steadily to the Debian repository. It is a slow process because of the quality control steps that must be gone through. It will take many months at least to get there.

Dalton was on the PineTalk podcast this week, talking about how he got into computing and Linux communities. It covered how UBports got started and how Pine 64 came on board. The link is available on pine64.org.

In other Pine news, we made a release candidate (rc) image a few weeks back but found that there was a bug in the browser so it couldn’t be released. The transition to Qt 5.12 then came along and caused more problems. Now we have fixed those issues too. On DTMF tones, we now have an implementation. These are the tones which manage the handshake on calls. We need users to test on different carrier systems but it should be working now and allow you to operate automated queuing systems with key presses. It should be available in the next rc revision.

Florian made a shout out for contributors to the Calendar app and the Camera app. There are bugs with both, needing to be verified and remedied. Neither apps have had a proper maintenance regime for a while now and we need to catch up. It would be great to have some basics like red-eye reduction and control over flash modes. Both apps are on Gitlab so it is easy to check what issues are open and whether you have the skills to close the gaps. You are welcome to jump right in at Gitlab but of course you can also drop by our groups or the forum and ask questions.

FluffyChat has just had an update to deal with push notification issues in Matrix. Thanks to Krille for resolving the problems we were experiencing.

We discovered a bug with Teleports on Xperia X where the threads resulted in only one core of the cpu running! Qt has some very nice multi-threading functions but those are quite sophisticated and you have to get the implementation just right. Get it wrong and apparently you are then limited to just one thread for each core that you have. A number of users found after the tdlib upgrade last year that Teleports had become unusable, with very slow loading and lots of messages missing. We have addressed the main issues but it is probably still not as fluid as we would like.

Alfred has been continuing his work on Xperia X, in particular on the runtime stability. Instead of frequent spontaneous rebooting that is now only occasional. There are reliable reports that parallel with that, there has been a significant improvement in battery life. The changes that Alfred has made coincides with the solution to the Teleports cpu issue, so it is now possible to turn off cpu use for periods of time, which of course benefits battery. Schedutil also helps with this.

Next, he wants to get Bluetooth calls working and fix the fingerprint reader. Florian and Marius have been importing some tweaks on Halium 7.1 to enable the fingerprint function, based on the detailed work done by Erfan. There are specific issues with Xperia X because a binary blob refuses enrollment of the fingerprints. Any insights into how to fix that would be welcome. (Sony, we are looking at you.) Incidentally, the volume in phone calls is now controlled. Muting is also working now, as a result of the fix. The core problem was that the system was talking in 32 bit language to a 64 bit responder.

The new devices page at devices.ubuntu-touch.io has had a major makeover. The devices supporting UT (now 55+) are listed there and a progress bar has been provided with each, which will hopefully reflect more clearly how it delivers in terms of everyday practicality. For each component feature that is listed as not working, you can now click on that feature to read the bug report. Of course for this to work as it should, each device porter or their representative needs to keep their own progress data up to date on their device page. We still need to do some work in promoting that but the mechanisms for doing it are now very simple. The webpages showcase a new standard of quality that is being rolled out under the supervising eye of Kaizen. Better presentation of information of course leads to better testing feedback and we are now seeing that. The new pages are generating a lot of traffic.

Marius was pleasantly surprised that (on some devices at least) the Qt changes instantly released some browser features, without a need for tweaking. Marius showed a spinning cube on a browser test page. That demonstrated OpenGL in action, a protocol that we had been missing until now. Apart from rotating cubes, users will find much more obvious benefits such as with scrolling fluidly through YouTube pages. Marius has been experimenting with Lomiri as daily driver on his desktop, with surprisingly positive results. It is still a pain to use but the performance level is good. Much better than expected. Most issues are X11 related and once we upgrade to Mir 2.3 many of those should be solved. Marius expects that from that point on, Lomiri’s functionality will be solid.

Caleb has a build working on OnePlus 6T using Manjaro Lomiri and Mainline.

OTA-16 is almost ready to release. 170 Github pull requests have been merged, with another 20 on Gitlab and with 330 packages overall having been changed. The release includes Qt 5.12, which is still LTS and is compatible with 20.04. Qt 5.15 comes next but the bulk of API changes have been taken care of in the 5.12 transition, so the next stage will be much easier.

The first OTA-16 based rc release should arrive on 15 February. There will probably also be an update on Wednesday, to get us back on the normal release track. A reminder from Dalton that he builds the change-log in UT manually. Ouch!

OTA-17 and beyond will see a bit of a slowdown. That will be inevitable as we gear up for Focal. The schedule should be the same but each release is likely to be small and centered on fixes. Libhybris is still going to be a very thorny challenge, especially because it demands a lot of different solutions for different devices.

Daniel asked whether Marius could make a simple tutorial for Lomiri in Manjaro and is the repo up to date? It is reasonably up to date, sufficient for it to work. A tutorial is possible for sure but it depends on other commitments.

Marius also replied to a question about progressive webapps. These are a feature whereby web functions are embedded in the desktop. It is popular especially on iOS. On Chromebooks, there is a link to ‘install as an app’ in the toolbar on some sites. It is a web container with extended features. Not an immediate prospect for UT.

What is the potential for Flutter apps to run on UT? Marius had a go at doing that when he went exploring and found that the option is broken. There is a way forward for it but it depends entirely on Wayland.

What about 5G on a UT device? Is it more complicated than 4G LTE? Well with Android 11 it will be extremely hard for sure. On Halium 10 it is already pretty much there, on one device at least.

Building apps on Ubuntu Touch
ManuelBoe asked whether Python and PyQt can be used to build UT apps? Pyotherside is supported, as well as Python and we have some guides on those docs.ubports.com and Appdev group on Telegram are the places to go. Incidentally, our build platform Clickable will run on MacOS, using Docker. You will need Pip and Python 3.