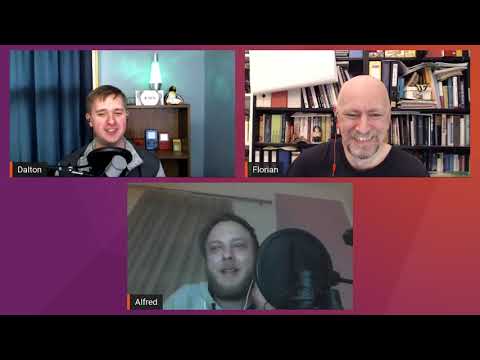 Presenting this time round were Alfred, Jan, Dalton and Florian.

Just four weeks since the release of OTA-13. Audio now re-routes to Bluetooth and back, on connection and disconnection. Ratchanan fixed it. Xperia Z4 tablet and Nexus 6P are now in the installer and there are lots of fixes for Android 9 - apps swipe now, cameras work better and there is support for external displays. Something new based on Android 9 is also heading this way soon.

Alfred has been working on the Pixel 3a and its XL version. It is built on the UBports CI, rather than on Halium and is moving rapidly towards the installer and getting updates. The thumbnails in Gallery now work. The fingerprint reader swipe function has been removed, to prevent accidental triggering. There is of course no Halium boot so it boots direct. That is new for us, on a newer device. The color scheme is now orange in the recovery. NFC now stops working when the screen is off, again guarding against accidents, while saving battery. System settings have been introduced for NFC but the page is very basic so far. The UI needs a lot more work and more actions. At present there is only communication with tags using open protocols, as there is no proprietary support. Device to device support might be possible to implement some time in the future. QtNFC is the basis of the Pixel implementation, so the fixes are transferable to other UT devices that offer NFC.

Maintainers are changing for a range of core apps. Calendar, Camera, Clock, Music and Printing all need a maintainer. All of them are built on Clickable. If you decide to take a look at one of those apps you can submit pull requests initially, then maybe become the maintainer later. David Farkus and Lionel Duboeuf have stepped up to maintainer roles.

Ari has greatly improved the porting guide for Android 7.1 devices. There are some links to 9.0 information but of course we need a lot of tidying there. Dalton is very taken with Readeraffe, which redirects pages within Sphinx, then manages them properly. Kudos to the developers of that! It makes life much easier.

TELEports is maintained by Florian. Voice note recording is now available in it, although not yet in a sophisticated fashion. If you record then release the mike button it will send your audio instantly. If that causes any embarrassment, you can press the message and slide it to left, which will delete it. Also new in TELEports is the ability to click a telegram link URL in the browser (these are in the format t.me) and that way join groups and channels directly. Contact import will work soon. There is no date for the release of this new version yet.

SensorStatus app now works with the magnetometer and the gyroscope. These can also now be used in an app. The magnetometer is an uncorrected detector of field so it will not provide an accurate compass reading. That needs calculating, which relies on input from the magnetometer and accelerometer simultaneously. Since we already have the accelerometer, you can see that we have the potential to do that calculation. Barometric pressure also seems to be working but not the temperature sensor.

Ubuntoutou noted that it usually takes a long time to port a device, so how come the OP6T arrived so fast? He said it could function as a great desktop computer, with its 8GB. First, on display use, it has no display adapter unfortunately. The 8GB RAM is great though. The answer to the question is that the Halium community has done some great work on the standard GSI. A lot of XDA people joined and helped with that too. There were more hands and less duplication, so work has been much more speedy on the Android 9 version of Halium. Cameras and sensors are already working well, just five or six months from the release of the GSI. That is very much faster than for the 7. 1 build.  Nikita in particular has done an amazing job. Jan is very proud that the installer now needs a scroller to handle the number of devices on the list!

Totalsonic asked whether there are plans to bring category based search to the sidebar. Well, featured within it is the ability to e.g. surface apps on a name basis etc. but a lot of the code which supported that has been removed because it became so unstable. It would certainly be possible to add some of that back in after bug-fixing and improvement. This is however yet another thing that would be a nice to have but unfortunately is not a priority. Other things are more pressing for OTA-15. As always, if someone would like to pick that up and run with it, they would be very welcome. The original work done by Canonical might be a good starting point for that.

Steve also asked about app splash screens and wondered why Morph and File Manager still have the old ones. They need to be neutral between night and dark. Those two need new icons and there was not enough time before OTA-14 to resolve the design issues around those, so there will be more discussion and they will arrive later. Camera splash is done but only for Android 9 devices.

Shouko asked if it is possible to theme Lomiri, in terms of fonts, app bar placing etc etc. No is basically the answer. All of that would be difficult to achieve but the worst of it is that customizing puts huge strain on testing because the number of possible combinations of selections is a vast number. For stability, every possible permutation would have to be tested. We don’t want themes to break so we keep it simple. If there is something particular behind the question (an accessibility issue maybe) it might not be too complicated in theory to introduce a small number of options. Be specific and explain what you want. As for tweaking just for the sake of tweaking, no.

Auri88 noted that UT has been ported now to a wide range of new (to us) devices, some of which are cheap. That is a big obstacle cleared. What are the next ones? We need to utilize more of the hardware features which those devices provide. Bluetooth is a major issue of course. Alfred would like to see it made easier for app developers to use background services with their apps. For example instant photo backup. Dalton suggested how to do web-push better. Wake the device when it has something to do. We don’t of course want the browser running in the background. Ubuntu-push could be made more like web-push. In other words more mainstream. Sync and push integration needs good implementation.

Why do we have so few apps?

How can we attract more developers and use more diverse programming languages to achieve that? Actually, the big platforms use just one very streamlined approach. The open source community is more eclectic in its use of tools than are the big players. On a follow up question about whether we could integrate more with the stores of their Linux based systems, the answer is a pretty firm no. Each has their own approach, for their own good reasons. Our OS uses Clickable, for example. There is going to be no convergence towards that. Click packages are strange but they work well for us. Stores are not the issue. The framework is. Qt and QML libaries are the basis of UT. Mobile operating systems are dramatically different from desktop and are way more complicated. Then there are issues such as our reliance on ofono rather than modem-manager, our unique push mechanism and our use of ContentHub. These are all very specific to us and not transportable.

As for what is necessary to attract app devs, the majority revel in feature rich phones, with an advanced graphical stack and fancy hardware. They don’t want to go hacking at a low level. Generally they are content to build on an IDE, for simplicity. We have to set up Qt creator, compiler etc. etc. And it is more difficult . Also we have to go to the device all the time. It is very frustrating that we are not able to build the UX on a desktop and test it there.

Fuseteam asked whether we are likely to go first for Mir back-porting or a Mir update? This is about tweaking to run UT on Rasperry Pi 4. Unfortunately it is nearly impossible to back-port, so we will a need newer Mir. What we can do initially is to move some Qtmir into Mir, which would ease that transition to Mir 2.0.