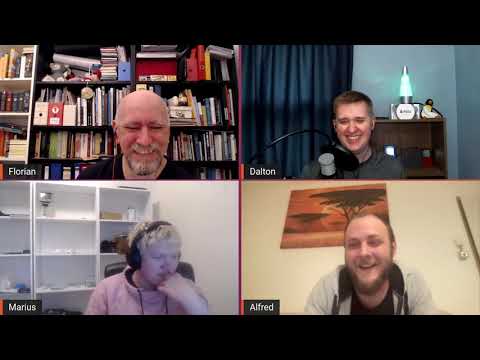 Presenting this time were Marius, Dalton, Florian and Alfred.
Go to devices.ubuntu-touch.io for info about whether your device is supported. The documentation to help people port devices to UT has been greatly expanded and improved, so make sure to check it out.

Mateo Salta has done another app roundup and came up with some good new ones. The Hacker News reader by David Ventura. You can read and upvote on there but as yet you can’t post. It is a fast QML version which presents itself like the web site but is not just a ‘webapp’. There is no downvote button yet :)

Francesco has made a really nice speedtest app. It has a cute cat which walks through the rain. That gives you your download speed.

There is a new maths app from Piotr Lange to add to their series, each of which does a simple task.

Dalton has been moonlighting again on Late Night Linux Extra. Check him out on episodes 28 and 29. The M1X from Apple may be interesting as it is not locked down like most of their hardware.


UBports Board of Trustees

Dalton gave a reminder about eligible members of the community joining the board of trustees of the Foundation.

Work is continuing with 20.04 and making good progress. One really nice thing is with Ubuntu keyboard and maliit. The history is that the maliit group liked the improvements that Canonical made when they were preparing the keyboard for UT, so they forked those changes into  the general maliit build, for a range of distributions. Since that time the two strands have diverged but now Rodney has been working to bring them back together again. As always, this is a benefit in both directions, as we benefit from each other’s work. That will enable more language plugins, different modes of keyboard entry etc. Plasma keyboard will benefit a lot too.

There has been some more work on building the root file system for the new images. Of course we have to move away from root so we are using a tool called debos. It runs a virtual machine, inside which the root file system is built. Getting it to run with Docker is not simple. Dalton found that the answer was to use Podman. It is a root list container manager/ daemon list container manager. So no need to run root on the box and it takes care of the Docker problem. The version of Podman shipped with 20.04 is too old for our purposes but borrowing the higher version from 21.04 does the job.


Pixel 3a with 4G support for North American users now!

Alfred brought us up to date with his work on the Pixel 3a. He has been perfecting the vibration modes. In particular, the vibrate on incoming call was very brief and insufficient to notice it. The phone now shows the correct system time directly after booting. There was a problem with the Android container and UT both wanting to set the time. IMS services have been disabled on the phone for the time being. That is a cell protocol which carries detect before sending. That was the main reason behind our community in the USA having a lot of problems receiving SMS and MMS via the three major carriers. There is now 4G support for North American users now! That was already working very well elsewhere but changes to the carrier network in the USA had got ahead of us. Rik and Soscat House And RocketToInfinity have been doing amazing work with Alfred behind the scenes to uncover the complexity behind the SMS and MMS block.

On the detail of this, you will have to check your APN settings carefully. You may have to edit the GPRS file which is in bar-list-ofono. If you are are invited to receive an MMS and it fails, try turning off WiFi and see if it arrives then.

Dalton has two of the Pixel 3a and loves that device. He now just has to figure out how to transfer his user data from the Xperia X. UT is not great at that…

In other news, the PinePhone now has a UT release candidate image out. If you have UT on a PinePhone, switch to rc in the settings and help test how this new release is working.The random modem resets appear to have been resolved temporarily by a workaround. There are fixes to audio, in particular to headphone jack detection. In addition to everything else, it now runs Qt 5.12.

Luca has been very busy borrowing packages from postmarketOS, where they have features that we lack. In addition, there has been traffic the other way, with some of our keyboard tricks making their way to that platform.

Although work is being done on 20.04 we haven’t abandoned the task of applying fixes in 16.04. Florian announced that OTA-19 is just about to be released. There may be two attempts at an rc and if so it will be the second one that needs testing. Keep an eye on the forum for up-to-date announcements on the testing regime. There are some very important fixes including battery management and mediahub performance.


There is a new camera sound. It sounds like a real shutter, not the old Android sound. Some other sound effects changes are on the way and we are also looking to make the camera sounds switchable so that you can use the functions in silent mode if you prefer. As it is a switch from the Android implementation, the change is not yet available in the PinePhone architecture. PinePhone does not use Qtubuntucamera, which is part of the difficulty we need to unravel.

Libremax asked about the comparisons that many people make between the ‘maturity’ of UT on the PinePhone, compared with that on a range of former Android devices. Should it not be made clearer that there are two distinct versions of UT, the Halium one (and some related pre-Halium builds for early devices) and the build for PinePhone?


A big distinction is the mainline kernel. At the moment the device page sets out in a very useful way the “what works and what doesn’t” aspects but it is not great at explaining the broken bits in the software, as opposed to the hardware compatibility issues.

Explaining that a particular apps or modules will work well in some places but not in others is quite a difficult thing to set out. It is easy to say “this is running on mainline” but most people will have no clue what consequences stem from that. Community suggestions on how we might approach this in a relatively user-friendly way would be very welcome. It is just very complex and the details are highly technical.

Alfred commented on the PDK (UBports Platform Development Kit) which he has developed. It started as a means of modelling Android based builds but he wants it to serve equally for modelling mainline builds. The full implementation of mirclient on the PinePhone should lead to the feel of UT being pretty much the same, whether a former Android device or a PinePhone is being used. Trust prompts need to be fixed on the PinePhone and that should do it.

Padu referred to the UT package database which omits any mention of sync-evolution in the Focal build. If we don’t have that, what will we use for contacts and calendar synchronization? As far as we are aware, sync-evolution is still actively maintained so even if it disappears from focal we can add it to our builds.The new 2.0 build now uses Python 3. That appears to be the major change.

In live chat, there was a question about whether we will be bringing out documentation to assist porting using Halium 10. Nikita has been doing amazing work on Halium 10 and has been making fantastic progress. The issue with documentation though is that releasing it would send out an implied message that porting with Halium 10 is now ready ‘for the masses’- or at least general developers. We are certainly not at that stage yet. Our idea is to release instructions as signal that the time has come for people to try.

Biggest of the problems are that there has to be a way to install the builds and we don’t have any user-friendly way of doing that yet. Second, there is as yet no mechanism for importing channel updates, on the device.

Halium 10 no longer has to grapple with the strange partition arrangements in their Android 9 version. That will make things easier for us but it also means that the tricks we used to run our own recovery will no longer work and all of that has to be redesigned. At the moment our recovery doesn’t play nicely with apparmor on all devices. The Android super-partition is actually what the Linux tool LVM is capable of managing. Of course instead of using that ready made tool, Google went down their own proprietary path so instead of just applying a plugin, we have a complicated process of building matching functionality. If anyone reading or listening has some specialist knowledge and would like to take a shot at hacking this puzzle, please message Florian and offer to help. [note: in the live chat, there was a suggestion that Google have backed off from the super-partition idea].

As far as Halium 11 and Halium 12 are concerned, it really doesn’t make any sense for us to get into those until Halium 10 is quite solid. One thing at a time. What is clear though is that we cannot spread ourselves over too many distinct builds at once and therefore getting up to date more will necessitate waving goodbye to older devices. At some point we will have to stop supporting devices which cannot progress beyond the Android 5 and 7 levels. A timely reminder again that users should at least be making plans for the retirement of those old devices and a switch to something newer. Not immediately perhaps but not too far in future.

For certain, nobody should waste their time trying to port devices based on 5.1 Halium. Focal cannot support the 5.1 Halium base so we have to decide whether to upgrade to 7.1 where we can or basically just abandon those early devices. Given the pressures on our time, pulling 5.1 Halium base devices forward is not likely to happen. So there is a kind of deadline.

The switch to Focal will probably mark the point where you have to move on. If you want a BQ it will probably have to be the Uplus...